Genesis ends on a very positive note. With Jacob now deceased, his sons continue in their restored relationship. They have grown as a people, and have the favor of the Pharoah and the people.

In Exodus 1 and 2 we see a significant shift. This illustrated in two verses.

1:7 But the sons of Israel were fruitful and increased greatly, and multiplied, and became exceedingly mighty, so that the land was filled with them.

1:8 Now a new king arose over Egypt, who did not know Joseph.

In 1:7, we see the transition from the first generation (Joseph and his brothers) to a new generation. It might be puzzling to see a contrast with “but” at the beginning of the verse. That indicates the change in focus and the development of chapters 1 and 2. The growth of Israel will continue, but instead of favor from the government of Egypt, it will be in spite of the government. The concluding epitaph for the older generation was the (partial) fulfilling of the promise in Gen. 12:2 (“make you a great nations”) and reaffirmed in Gen. 15:5-6.

In 1:8, the change in king is not unusual. But notice that the new king did not know Joseph. How can that be? In our present world that is like saying that we don’t know who Martin Luther King, Jr. was. But this simple statement signals not just a change of kings but a change of dynasties. Thus, the new dynasty would “rewrite” the history books or court documents so that no mention is made of any previous rule, and especially one as successful as Joseph.

In 1:9-11, the Egyptians try to stymie the growth of the Israelites— “afflict them with hard labor” (1:11). Despite their attempts, God still blesses the Israelites (1:12).

That leads to further attempts at defeating/discouraging them. The piled up descriptors of the Egyptians imposing their will on the Israelites continue:

1:13-14 The Egyptians compelled the sons of Israel to labor rigorously; and they made their lives bitter with hard labor in mortar and bricks and at all kinds of labor in the field, all their labors which they rigorously imposed on them.

The king finally determines that the only way to stop the Israelites from growing more is to kill the babies, and especially the male babies. But God spared the midwives to refused to follow the king’s edict. Note that the people now are referred to as Hebrews (see Gen. 14:13 as the first use in describing Abram).

In chapter 2 we find the introduction of the next major figure in salvation history. In fact, he will loom over the rest of the Old Testament, even casting a shadow into the New Testament.

Moses is born to an Israelite woman, Jochebed. She is not named in this Exodus account, but in Numbers 26:59 we read:

The name of Amram’s wife was Jochebed, the daughter of Levi, who was born to Levi in Egypt; and she bore to Amram: Aaron and Moses and their sister Miriam.

She is the first person in the Bible that includes the name Yahweh as part of the name (“Yahweh is her glory”). This brings tantalizing possibilities considering how God reveals his name in Exodus 3:14. 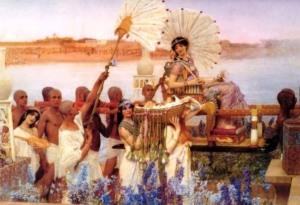 Interestingly, Miriam is the one who is featured in this story of saving the baby Moses. She puts the baby into a basket and then watches as the daughter of the king has the baby rescued. Quickly she volunteers to find a woman among the Israelites who can nurse the child. Of course, her mother (and Moses’ mother), Jochebed, is the one who cares for him. Moses is then raised in the house of the king’s daugher.

The story moves fast forward as Moses is now a man. He sees the injustice being done to the Hebrews and steps in to stop an Egyptian from beating “a Hebrew, one of his own people.” He eventually kills the Egyptian, thinking he has brought justice.

Little does Moses know that it became known among the Hebrews. The very next day, when Moses intervenes between two Hebrews, one challenges him: “Are you intending to kill me as you killed the Egyptian?” (2:14). On top of that, Pharoah (2:15) tries to kill Moses.

Moses flees from Egypt to Midian and stays with a priest in Midian. He marries one of his daughters and they have two children.

The Cry of the People

And this is what he leaves in Egypt:

In other words the change in dynasty continued the assault on God’s people. Even as Moses is born to be the eventual deliverer of the Israelites, the conditions continue for another 40 years.

Just think of it, generations of labor and difficult labor, slave labor, and it seems as if it not only continues but gets worse with time. The cry of desperation is loud, agonizing, and yet seemingly lost to a distant God.

Not Forgotten but Remembered

For us, it easy to jump to vv. 24-25. But the Israelites who were groaning suffered for the first 40 years of Moses life, then 40 years while he is in exile in Midian. 80 years and no change, no response from God.

So God heard their groaning, and He remembered His covenant with Abraham, Isaac, and Jacob. God saw the Israelites, and He took notice. (2:24-25 HCSB)

Despite what seems to be inaction, God heard their groaning. Even more God remembered His covenant. When we read about “God remembering” it is not like, “I forgot where they were, oh, wait, that is where I put them.” Rather, when God remembers he does so as the basis for taking action (Gen. 9:15-16; Lev 26:42, 45; etc.). That begins in chapter 3 with the call of Moses.

How easy it is for us to overlook this point. In our agony over an extended time, and repeated pleas for God to answer, rescue, etc. we think that God has forgotten us.

God works at His pace in His ways. Always better than we could imagine, but taking much longer than we demand!

We are not forgotten but remembered. That is what makes God’s means of reassuring us that He has not forgotten so special. In Baptism, yes we remember it, but not because it was something we did, but something that God did, and is still doing. Paul wrote about this way:

Or do you not know that all of us who have been baptized into Christ Jesus have been baptized into His death? Therefore we have been buried with Him through baptism into death, so that as Christ was raised from the dead through the glory of the Father, so we too might walk in newness of life. For if we have become united with Him in the likeness of His death, certainly we shall also be in the likeness of His resurrection, (Romans 6:3-5)

Notice who is the active one: God. We receive through faith what He does.

When Jeremiah prophesies about the new covenant (testament), he includes this issue of remembering, but also not remembering.

“for I will forgive their iniquity, and their sin I will remember no more.” (Jeremiah 31:34)

So also in the Lord’s Supper (the new testament), a meal of remembrance, but far beyond a vague recollection, rather Jesus acting in forgiving us. Thus, Jesus Christ speaks His words to us in the present:

So we remember, but more importantly Jesus has remembered us and acts to forgive our sins at the present time. We are not forgotten but remembered and forgiven.